11 days in South of France Itinerary

11 days in South of France Itinerary

Deepen your sense of the past at sights like Vieille Ville and Cathedrale Saint-Nicolas a Nice. Bring the kids along to Marineland and Cap Ferrat Diving. Change things up with a short trip to Saint-Paul de Vence in St-Paul-de-Vence (about 32 minutes away). There's lots more to do: don't miss a visit to Promenade des Anglais, take in the architecture and atmosphere at Eglise Notre-Dame-du-Perpetuel-Secours, get to know the fascinating history of Rue Obscure, and steep yourself in history at La cité médiévale.

To see other places to visit, traveler tips, more things to do, and tourist information, refer to the Nice visit planner.

©
On the 14th (Mon), contemplate the long history of Chateau de Castelnaud, then don't miss a visit to Chateau des Milandes, and then make a trip to Chateau de Beynac.

Plan a Castelnaud-la-Chapelle trip in moments using our itinerary builder.

Things to do in Castelnaud-la-Chapelle 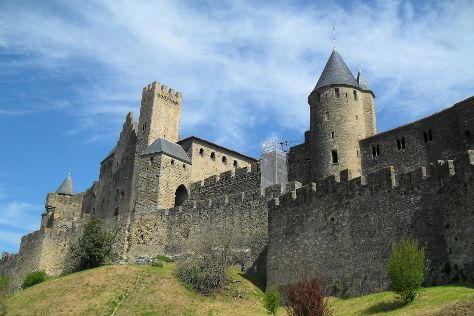 Best known as a fortified town, Carcassonne is a walled city that provided the inspiration for the castle in Disney's "Sleeping Beauty" and the location for many scenes in Kevin Costner's movie "Robin Hood." For a daily dose of excitement, medieval jousting tournaments are held twice per day between the two walls--while this may sound like a typical touristy show, it's actually an entertaining display of combative competition and horsemanship.

Start off your visit on the 15th (Tue): explore the historical opulence of Chateau Comtal, take in the architecture and atmosphere at Eglise Saint-Nazaire, then make a trip to La Porte D'aude, then steep yourself in history at Cité de Carcassonne, and finally pause for some serene contemplation at Carcassonne Cathedral.

Things to do in Carcassonne

Kick off your visit on the 16th (Wed): explore the ancient world of Roman Theatre of Orange, then look for all kinds of wild species at Wine Safari, then make a trip to Palais des Papes, and finally take in the views from Pont d'Avignon.

To see more things to do, ratings, where to stay, and other tourist information, read our Avignon trip itinerary builder.

Getting from Carcassonne to Avignon by car takes about 2.5 hours. Other options: take a train; or take a bus. June in Avignon sees daily highs of 83°F and lows of 60°F at night. Cap off your sightseeing on the 16th (Wed) early enough to go by car to Hyeres.
more less

Roman Theatre of Orange
Find places to stay Jun 15 — 16:
Hotels on TripAdvisor
Homes on Airbnb
Highlights from your plan

©
Hyères, Provençal Occitan: Ieras in classical norm, or Iero in Mistralian norm) is a commune in the Var department in the Provence-Alpes-Côte d'Azur region in southeastern France.The old town lies 4km from the sea clustered around the Castle of Saint Bernard, which is set on a hill. Kick off your visit on the 17th (Thu): take in the waterfront at Port de Sainte-Maxime, then identify plant and animal life at Pointe des Sardinaux, then pause for some serene contemplation at Eglise Sainte-Maxime, and finally look for all kinds of wild species at Les Vieux Salins d'Hyeres. Get ready for a full day of sightseeing on the next day: take in the architecture and atmosphere at Eglise Saint Jean-Baptiste, then explore the striking landscape at Sentier Jean Francois Jube, then look for all kinds of wild species at La Route du Sel, and finally discover the deep blue sea with a scuba or snorkeling tour.

Discover how to plan a Hyeres trip in just a few steps with Inspirock's itinerary builder.

Getting from Avignon to Hyeres by car takes about 2 hours. Other options: take a train; or take a bus. Expect a daytime high around 79°F in June, and nighttime lows around 60°F. Finish up your sightseeing early on the 18th (Fri) so you can go by car to Marseille.
more less

Things to do in Hyeres

Start off your visit on the 19th (Sat): take in the waterfront at Le Vieux Port and then contemplate in the serene atmosphere at Basilique Notre-Dame de la Garde.

To find reviews, more things to do, where to stay, and other tourist information, read Marseille sightseeing planner.

Traveling by car from Hyeres to Marseille takes 1.5 hours. Alternatively, you can take a train. In June, daily temperatures in Marseille can reach 83°F, while at night they dip to 63°F. Wrap up your sightseeing by early afternoon on the 19th (Sat) to allow enough time to travel back home.
more less