This plan was created by another user. Make it your plan
Edit start date
Want to change plan duration?

City of a Hundred Spires

Rouen is situated on the River Seine, about 90 minutes from Paris.

Take a break from the city and head to Deauville Beach and Falaises d'Etretat. You'll explore the less-touristy side of things at Parc du Marquenterre and Saint Catherine's Catholic Church. Explore the numerous day-trip ideas around Rouen: Le Touquet Beach (in Le Touquet – Paris-Plage) and Cathedrale Notre-Dame d'Amiens (in Amiens). And it doesn't end there: take a stroll through Rue du Gros-Horloge, admire the landmark architecture of Cathedrale Notre-Dame de Rouen, and explore the world behind art at Musee des Beaux-Arts de Rouen.

For other places to visit, maps, reviews, and more tourist information, you can read our Rouen road trip tool .

Washington DC, USA to Rouen is an approximately 13-hour combination of subway, bus, flight, and train. You can also do a combination of flight and train; or do a combination of train and flight. The time zone changes from Eastern Standard Time (EST) to Central European Time (CET), which is usually a 6 hour difference. Plan for a bit cooler temperatures traveling from Washington DC in April, with highs in Rouen at 59°F and lows at 41°F. Finish your sightseeing early on the 9th (Thu) to allow enough time to drive to Bayeux.
more less

Things to do in Rouen

Most travelers take a trip to Bayeux to see the famed tapestry depicting the legendary Norman Conquest from the 11th century.

Explore hidden gems such as Cathedrale Notre-Dame and Airborne Museum. Popular historic sites such as Pointe du Hoc and Musee du Debarquement Utah Beach are in your itinerary. Get out of town with these interesting Bayeux side-trips: La Maison du Biscuit (in Sortosville-en-Beaumont), Le Havre de Portbail (in Port-Bail) and Maison Lebrec (in Saint Pierre du Mont). There's lots more to do: take an in-depth tour of Memorial de Caen, witness the site of a historic battle at Omaha Beach, stroll the grounds of Normandy American Cemetery, and admire the masterpieces at Musee de la Tapisserie de Bayeux.

Traveling by car from Rouen to Bayeux takes 2 hours. Alternatively, you can take a train; or take a bus. In April, daytime highs in Bayeux are 58°F, while nighttime lows are 40°F. Cap off your sightseeing on the 12th (Sun) early enough to catch the train to Paris.
more less

Things to do in Bayeux

You'll explore the less-touristy side of things at Saint Germain des Pres Quarter and Chateau de Cheverny. Popular historic sites such as Eiffel Tower and Arc de Triomphe are in your itinerary. Step out of Paris with an excursion to Palace of Versailles in Versailles--about 48 minutes away. There's lots more to do: shop like a local with Champs-Elysees, take a stroll through Île de la Cité, pause for some serene contemplation at Basilique du Sacre-Coeur de Montmartre, and explore the world behind art at Louvre Museum.

For other places to visit, topicsMoreInfo.option.ratings, where to stay, and more tourist information, use the Paris trip itinerary builder site .

Take a train from Bayeux to Paris in 2.5 hours. Alternatively, you can drive; or take a bus. In April, daytime highs in Paris are 60°F, while nighttime lows are 42°F. Finish your sightseeing early on the 16th (Thu) to allow enough time to travel to Cannes.
more less 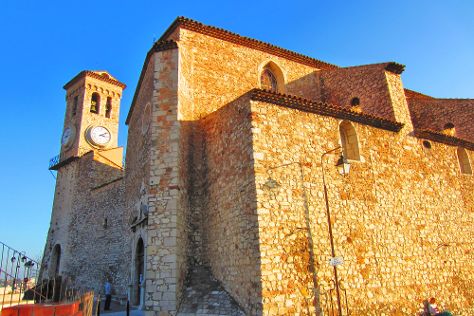 Although its luxury shops, nightlife, casinos, and high-end restaurants give Cannes a feeling of exclusivity, this classic French Riviera city has alternatives to suit every budget.

Eschew the tourist crowds and head to Saint-Paul de Vence and Le Suquet. Head to La Croisette and Rue d'Antibesfor plenty of shopping. Explore the numerous day-trip ideas around Cannes: Villa & Jardins Ephrussi de Rothschild (in St-Jean-Cap-Ferrat) and Nice (Vieille Ville & Palais Lascaris). There's much more to do: browse the fresh offerings at Marche Forville, discover the deep blue sea with a scuba or snorkeling tour, steep yourself in history at Chateau de la Napoule / Musee Henry-Clews, and take in the exciting artwork at Pierini Verre contemporain.

Traveling by flight from Paris to Cannes takes 4 hours. Alternatively, you can take a train; or drive. Plan for a bit warmer temperatures traveling from Paris in April, with highs in Cannes at 66°F and lows at 48°F. Finish up your sightseeing early on the 20th (Mon) so you can travel back home.
more less

Things to do in Cannes